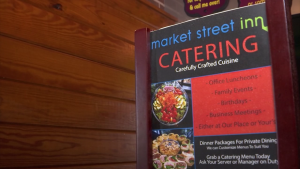 SALISBURY, Md. – Market Street Inn is catching some criticism after one organization says they haven’t kept their promise to host employee training after a controversial sign was posted outside of the restaurant nearly five months ago.

The sign that was put up in January said, “So if a male can identify as a female, can a bar identify as a grocery store?” and that was met with extreme backlash. In response, Mark DeLancey with Salisbury PFLAG says they offered to host sensitivity training for Market Street Inn employees, and that’s something the owner of the restaurant, Rob Mulford, said he would definitely do.

But on Sunday, PFLAG posted a statement saying they hadn’t heard back from Mulford after several attempts to schedule the training. Several people commented on the Facebook post, saying it was an empty promise from Mulford.

But he says he does want to uphold his end of the promise, but that it’s been a tough time for businesses.

“Between over a hundred thousand dollars in bills from last year, licenses, being short staffed, trying to keep the place going, and then trying to have responsibility to my family as well, as well as the employees that are giving their all trying to keep this going, it’s hard and there’s no guidelines for this,” Mulford said.

Delancey, though, says that’s not an excuse.

“I appreciate the gesture, although that’s been the same statement that he’s used six times now, so that being said, I look forward to working with him and get this done if he still wants to, but we actually need him to do something to make that happen,” DeLancey said.

Mulford says he plans to reach out to PFLAG sometime soon to get the ball rolling, but that in the meantime his staff has made changes to how they approach these situations. DeLancey says his organization is going to offer the training to other local businesses who have expressed an interest in doing so.