Community members march for peace and justice for their city 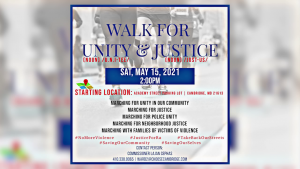 CAMBRIDGE, Md. – On Saturday, city officials and community members joined together for a peaceful march in hopes of bringing unity and justice to their city.

Around 2 p.m., participants met up at the academy street parking lot in Cambridge. Community members and and city officials marched to advocate for justice, and unity between police and the community. Families of victims of violence also participated in the march.

March organizer and city commissioner, Lajan Cephas cited the case of Roderick Russ, who was killed in Cambridge in October 2020. She tells 47 ABC, she just wants the community and police to work together to bring justice to families, and bring peace back to their neighborhood. “It’s about being in support of our police department in light of everything that’s going on within United States. We actually do support our local police department,” says Cephas. “This is just an attempt for those who live in the community to let them know that all communities, all neighborhoods, all wards, we want to actually back these communities and let them know that we’re taking our streets back and we’re saying no to crime. There’s going to be no more protection for these people that want to terrorize neighborhoods.”

We’re told, law enforcement is actively seeking Ryshon Kelly, the suspect wanted in connection with the murder of Roderick Russ.