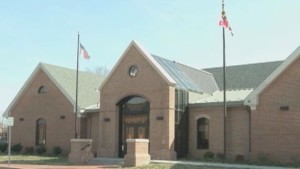 EASTON, Md.– Police arrested a man for possession of a firearm after stopped a car traveling east on Rt. 50 for a traffic violation on Friday.

During the stop officers say they smelled Marijuana from inside the car and proceeded to search the vehicle.

Police say they located some marijuana and a handgun on the feet of the passenger, Bryant O’Neil Moore.

Moore was taken into custody and was held pending a hearing with the District Court Commissioner.