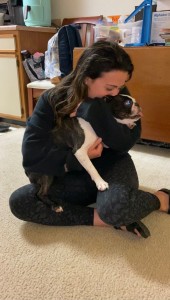 MARYLAND – If dogs could talk, one pup named Fisher would have a tale to tell about where he’s been for the last nine months.

In a post in the Find Fisher Facebook group that has over 7,000 members, Elissa Battista, Fisher’s mom wrote: “I was contacted by someone on the Facebook Page with a screenshot of a lost dog from a group I didn’t belong to. Many MANY people shared it with us almost instantly – and for that I am eternally grateful. From the moment I saw the photos I knew it was him from the markings and his little tongue sticking out.”

Battista wrote that a family say Fisher roaming around their neighborhood with a collar on but no tags. After they posted about the found dog on Facebook, a vet checked him for a microchip, and it was confirmed to be Fisher.

Battista wrote that his paw is injured, but otherwise the pup is healthy, and most importantly, now home.

NATO chief says alliance aims to boost rapid reaction force numbers from the current 40,000 to over 300,000