A bill to remove the state’s authority during COVID

DELAWARE – Lawmakers are considering a bill that would remove the state’s ability to enforce COVID related restrictions. Senate Bill 58 would take away the state government’s ability to forcibly isolate, quarantine, vaccinate or treat individuals against their will for COVID-19.

Sponsors of the bill say, no one expected the pandemic to last this long but they feel that the government has over-stepped their boundaries along the way. Many Delawareans also expressed some strong opinions on social media regarding this bill how the government has handled this pandemic. “Constitutional rights don’t just go away because we’re in an emergency,” says Senator Dave Lawson, sponsor of the bill. “I thought we better address it legislatively so that people can make up their own mind.”

Lawson also tells 47 ABC, numbers in cases and hospitalizations are down, and him as well as his other sponsors say, they’re not sure why the state is still considered to be in a state of emergency. “Yeah it’s all done in good intentions initially but boy have they been abused by many many people throughout history and we’re showing that same abuse again, government overreach and it should not be,” says Senator Lawson.

After taking to social media, many Delawareans had a lot to say about this bill. Many people say they are in support of the government not intervening with their health, but some say other’s health and not following guidelines could cause issues. 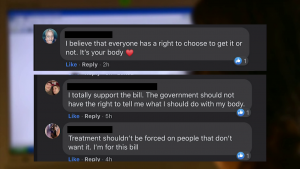 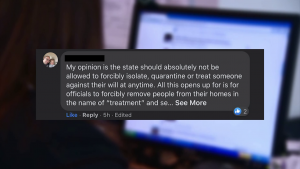 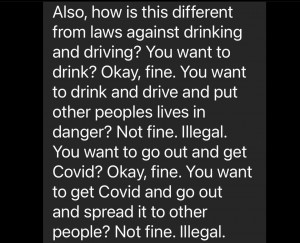 We also reached out to TidalHealth on the issue which they provided a statement provided by Wayne Smith, President & CEO of the Delaware Healthcare Association, “The Delaware Healthcare Association supports the availability in Code of tools necessary to protect public health and welfare. We think the State of Delaware has exercised such powers available to it in meeting the current crisis with appropriate consideration of interests given the priority of protecting life and health in the face of this deadly pandemic.”

However , Senator Lawson says at the end of the day this is about making the right decision. “I don’t agree that we should be doing this regardless of what party is in place, I think this is wrong,” says Senator Lawson.

Bill sponsors also say there is concern regarding the lack of research and testing on the vaccines. Senator Lawson, says he doesn’t think a government has the right to tell anyone to receive an experimental vaccine. Regardless, most people say they are in agreement that most health decisions should not involve the government.

Bill sponsors asks Delawareans to reach out to their local legislator to ask them to support this bill. The bill has been voted out of committee, and is placed on the ready list for further discussion and action.