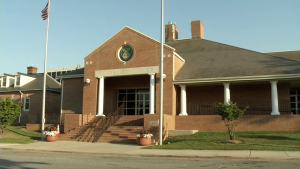 Police officers responded to the parking lot of an IHOP around 2:30 Sunday morning on South Little Creek Road.

Officers were told that a black Dodge Charger drove away from the scene immediately after the shooting.

Police say they found the vehicle and searched the car and found a handgun in the glove compartment.

The victim has non- life threatening injuries, and the investigation is ongoing and the department says more information will be released when it becomes available.