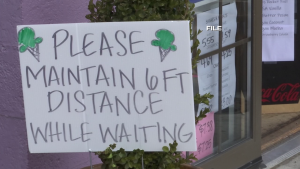 MARYLAND – Restaurants may be one of the hardest hit industries amid the COVID-19 pandemic. That’s why the local business community is rallying together to ask Maryland Governor Larry Hogan to ease up on some restrictions. They’ve obviously put a halt to the ability of the restauranteur to make income. I’ve really been hearing from people lately that they’re fearful and there’s not a light at the end of the tunnel,” said Executive Director of the Ocean City Hotel Motel and Restaurant Association Susan Jones.

By now, it’s been just less than a year since the COVID-19 pandemic began. President and CEO of the Salisbury Area Chamber of Commerce Bill Chambers says now is crunch time for restaurants to get back on track. “We’re not only suffering the post holiday lapse in business that is traditional. It’s just compounded this year because of the pandemic and because of the restrictions,” said Chambers.

In a letter sent to Maryland Governor Larry Hogan, the group asked for certain restrictions to be rolled back. Those include allowing restaurant buffets to reopen under safety guidelines, increasing table capacity to ten people, and allowing for barriers between booths. “Why are things allowed in other industries that are not being allowed in the restaurant world, in terms of letting these guys be able to serve people in a restaurant if they’re comfortable coming in and sitting down and having a meal?” said President of the Dorchester Chamber of Commerce Bill Christopher.

The letter also called for restaurant workers to be prioritized under phase 1c of Maryland’s vaccine rollout. That’s something that Jones says would not only protect those workers, but build back consumer confidence. “It solidifies to the consumer that we’re taking every step we can as a restaurant operator to make sure that we are giving you a safe environment, so that you can feel comfortable,” said Jones.

Currently Maryland is in phase 1c of the vaccine rollout. That means if Governor Hogan move restaurant workers up, they could be eligible to get vaccinated right now. Until then, those workers remain in phase two. “When a restaurant owner can say ‘Hey, all of my employees have been vaccinated,’ you’re now increasing the level of confidence for customers and consumers to be able to come back in,” said Christopher.

Plus, Governor Hogan is being asked to allow local jurisdictions to make decisions on how and when restaurants can safely continue to reopen. “We really need those local decisions to be made on the ground here based on science. There is no science that shutting restaurants down and curtailing their operations has anything to do with infection rates,” said Chambers.

47ABC did reach out to his office for a statement on the letter. They did not immediately respond for comment.