MARYLAND – Maryland Governor Larry Hogan is looking to tackle gerrymandering. On Tuesday, the governor issued an executive order that calls for the creation of a commission to look at re-drawing the legislative and congressional maps for the 2022 mid-terms.

The Governor says recent redistricting cycles have made the state one of the most gerrymandered  in the country. Hogan calls the current maps a “blatantly obvious scheme”  where one party rigs the system to concentrate one party’s voters while segregating the other party’s voters into a larger number of districts. He also says the current maps have created under-representation for both Black voters and Republicans.

“This is exactly the kind of formula that leads people to doubt whether their Democracy is fair and is truly working for them,” says Maryland Governor Larry Hogan.

In Tuesday’s press conference, Governor Hogan said Governor Martin O’Malley drew the current maps in 2011 and was deposed in a major federal lawsuit challenging their constitutionality. O’Malley admitted under oath, “It was my intent to create a district where the people would be more likely to elect a Democrat than a Republican.” 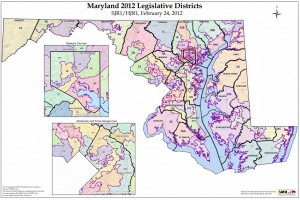 The independent and nonpartisan commission will have a total of nine people: three Republicans, three Democrats and three independents.

The governor’s executive order charges the commission with producing fair maps for both state legislative and congressional districts that comply with a set of criteria, including:

The commission will conduct regional summits to allow citizens to offer comment on the boundaries of the congressional and legislative districts, along with a listening tour prior to the drawing of the maps.

Three co-chairs have already been appointed:

The remaining six members will be selected from applications directly submitted by citizens. The selection of members intends to produce a commission that is independent from legislative influence, impartial, and reasonably representative of the state’s diversity and geographical, racial, and gender makeup. Residents can apply to be on the commission by visiting Governor.Maryland.gov/redistricting.

“I am honored to have been asked to co-chair the Maryland Citizens Redistricting Commission and to participate in the important task of drawing boundaries for legislative and congressional districts in Maryland,” says Judge Alexander Williams. “I look forward to working with other members of the commission in developing an independent and fair plan.”

“I am honored to have been asked by the governor to serve as one of the chairs of the Maryland Citizens Redistricting Commission,” says Dr. Kathleen Hetherington. “I look forward to working with Judge Alexander Williams and Walter Olson on the commission as we begin our charge.”

“Fair and impartial redistricting builds confidence in our democratic system,” says Walter Olson. “Direct citizen involvement, sunlight, and fair districting standards have proven their worth in other states. I hope everyone who cares about democracy in our state will consider volunteering to serve on the commission, making your voice heard by way of public comments and hearings, or even filing proposed maps. I’m honored to be part of a process that can make history in Maryland.”

“Marylanders deserve fair representation. We should be a leader on this issue, but the Maryland General Assembly failed to take action last session on bipartisan redistricting reform even as we prepared to draw new lines the following year. While we continue to urge the legislature to support legislation being introduced this session, we support the steps taken today. We look forward to working with Governor Hogan and the General Assembly to ensure the redistricting process is accessible, transparent, and centers input from the community,” says Joanne Antoine, Common Cause Maryland.

“Our Maryland government must create transparent processes that serve all of its citizens fairly, without regard to their voter registration. Without trust between the government and the governed, democracy fails. While the gold standard is an independent commission, we support the Governor’s Maryland Citizen Redistricting Commission because its process begins with public hearings and produces a map without input from elected officials,” says Beth Hufnagel, Redistricting Team Leader, League of Women Voters of Maryland