CAMBRIDGE, Md. – A fire broke out at a Cambridge home over the weekend, leaving a family of six without a place to call home. As investigators try to figure out what caused that fire, the community is trying to help the family after they lost everything.

“The house caught on fire and we lost everything,” says Cherelle Cephas. “Me and my children, thank God we weren’t home.”

Cherelle Cephas and her five children have been living at 708 Douglas Street in Cambridge for almost four years. That is until Sunday, when a fire broke out around 3 a.m.

According to the Maryland State Fire Marshall, a neighbor called for help and it took about 25 firefighters an hour and a half to get the blaze under control. “There was heavy fire damage through out the entire structure with a partial collapse of the building in the rear,” says Deputy Chief State Fire Marshal Matt Stevens.

Officials say the fire caused 85-thousand dollars worth of damage. Now investigators are facing challenges as they try to figure out where and how the fire started in the first place. “They’re trying to track down any witnesses who may have seen anything in an attempt to find someone who may have saw the fire in its very early stages,” says Stevens.

Cherelle Cephas also says she’s not sure how this happened adding they don’t have space heaters, which are usually linked to fires. “We were shocked. I don’t know why someone would do something like this. Hopefully it was accidental but we don’t know yet.”

In the meantime, the community is rallying together to try and gather items for the family including sharing lists of the kids’ clothing sizes on social media. “Right now Red Cross put us in a room. We have family members that are trying to search for another house for us and we’re just going to go from there hopefully we can get some people to help us. It’s hard,” says Cephas.

If you have any information that may help officials as they investigate the cause of this fire, you’re asked to call Deputy State Fire Marshals at 410-713-3780.

If you would like to donate any items to the family, you can see the clothing sizes needed below and you can reach Charelle Cephas’ niece at 443-205-2097 or on Facebook at Kee So’Lovely.

Clothing sizes needed are listed in the photo below: 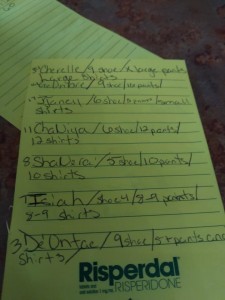