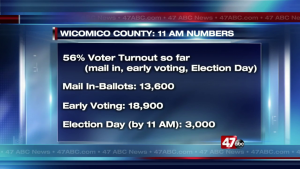 Officials say as of 11 AM on Election Day, there was about a 56 percent total voter turnout including mail-in ballots, early voting and in-person day of turnout. They’ve had about 13,600 mail-in ballots processed so far but they expect that to go up because of those postmarked on Election Day.

As for early voting, about 19-thousand voted during that time which is a number officials don’t think they’ve hit before. About three-thousand ballots were cast in-person by 11 AM on Election Day.

Maryland is a state that allows voter registration on Election Day but if you do that, prepare for the process to take a little longer.

Polls are open in Maryland and Delaware until 8 PM on Election Day.

Click here to find your vote center in Maryland.

Click here to find your vote center in Delaware.