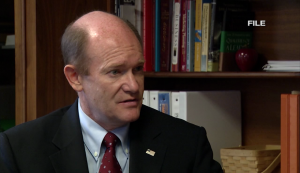 DOVER, Del. – Incumbent Delaware United States Senator Chris Coons,  has defeated Republican challenger Lauren Witzke. Senator Coons received 280,169 votes or 60% of the vote, while Witzke received 174,639, or 30% of the vote.  Senator Coons tells 47 ABC that he’s grateful for the support from the residents of Delaware, and he’s looking forward to representing the first state over the next couple of years.

“There’s a lot of important work to do in the year ahead. Job one is getting us out of this pandemic and rebuilding our economy. But we also need to come together as a country and address some of the challenges with racial inequality, health equity, and opportunity,” said Coons.

Senator Coons adds that in addition to rebuilding the economy, he’s also focusing on climate change and the opioid epidemic throughout the country, and pushing for legislation that would require background checks before a person purchases a gun.