TALBOT CO., Md. – This November, Talbot County residents will have the chance to vote on a tax increase. The County’s Sheriff says he knows that’s not a popular topic but he believes that’s the only way to help them retain and recruit officers.

“It’s tremendously frustrating. We have had some great applicants during my six years here only to see them leave,” says Talbot County Sheriff Joe Gamble.

Sheriff Gamble says officer applications are down at least 50 percent at the Talbot County Sheriff’s Department and due to a lack of funding, they can’t even keep the good officers they get. “I can’t compete with 20 year retirement. Anne Arundel County is paying $20,000 signing bonus for a current police officer plus a $10,000 to $20,000 raise on top of that plus a 20 year retirement,” says Sheriff Gamble.

But he’s looking towards this November’s election as a chance to increase funding for the department. Specifically residents will be able to vote on questions B and C, which are logistical involving changes to the charter, as well as question D which would increase property taxes by one penny over a total of five years before it dies out all together. For a property valued at $250,000 it would mean an extra $25 in property taxes each year for those five years. 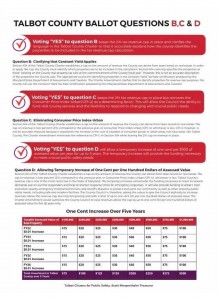 County council members unanimously approved the questions to appear on the ballot and say the money would also help with funding for ambulance services. “Right now we don’t have enough professional ALS personnel and stations in order to reach every person who needs it in this county,” says Talbot County Council Member Pete Lesher. “There are times when we have all our ambulance units dispatched. If another call comes in, who is going to cover?”

Sheriff Gamble says he hopes this additional funding makes their department more appealing to prospective officers because he says he only wants the best people for the job. “We just can’t compete. I say this all the time and I’ve coached for years but I don’t want leftovers.”

He adds that this additional funding would not benefit his paycheck. “I don’t want the naysayers saying, ‘Oh the Sheriff is looking for something.’ Financially I don’t benefit at all but as a citizen here I’ll benefit when I’m done and retired from the Sheriff’s Office. I’ll know we have good people. The best people we can find that money can buy.”

Sheriff Gamble says he’s personally willing to talk to any and all residents who want to learn more about the proposed tax increase before they vote on it. You can call him at the Sheriff’s Office at 410-822-1020.