QUEEN ANNE’S CO., Md. – The superintendent for Queen Anne’s County is responding to calls for her firing that have gained traction over the past month. This comes after she sent out a letter to families in which she expressed support of the Black Lives Matter movement.

“To be clear, I will not stop speaking out about issues of racism, injustices or equity,” says Queen Anne’s County Superintendent Dr. Andrea Kane.

Queen Anne’s County Superintendent Dr. Andrea Kane is responding to people who are calling for her to be fired, two months after she penned a letter to families expressing support for Black Lives Matter. 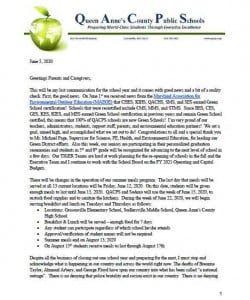 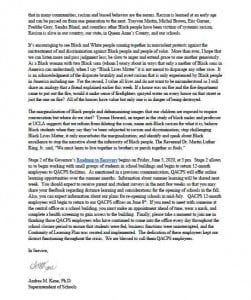 The superintendent speaking out at the most recent board of education meeting, defending her decision. “With such small percentages of students of color here in Queen Anne’s County the isolation and impact caused by racism is amplified. I know this firsthand.”

She starts the letter talking about green certifications for the county’s schools, graduation and summer meals. She then spends three paragraphs addressing recent instances of police brutality, referencing the deaths of Breonna Taylor, Ahmaud Arbery and George Floyd. She also advocates for educational conversations about racism. “Queen Anne’s County and Queen Anne’s County Public Schools should not be exempt from acknowledging injustices toward black people and other people of color and committing to do all that can be done to lessen its impact on students,” says Kane.

Over the past month an online petition to “stop radicalization” of public school children has been gaining traction, garnering more than 750 signatures. The creators of the petition say the superintendent is attempting to radicalize students with a “Marxist ideology”, describing the Black Lives Matter movement as racist, hateful and divisive.

However just as the superintendent has critics, she also has supporters. “Obviously I don’t feel that supporting the Black Lives Matter movement is a justifiable reason for her to lose her job,” says Marco Garcia, a member of Millennials Demanding Change.

A counter petition also a roughly a month old now has more than four-thousand signatures and a caravan protest in support of her spanning across four counties is planned for Sunday. “Other people are starting to see she does an amazing job and has an amazing track record and we need to protect her,” says Mya Woods, the president of Millennials Demanding Change.

Jeff Straight, the Public Information Officer for Queen Anne’s County Public Schools, says they’re in support of Superintendent Dr. Andrea Kane. “She put out a letter to parents towards the end of last semester and I thought ‘well who could react negatively to this?’ Well some people did,” says Straight. “It’s a distraction to us as we are getting ready to go back to school. We’re supporting her.”

47 ABC reached out to Gordana Schifanelli, the creator of the online petition that criticizes the Superintendent. She gave provided the following written statement:

Superintendent Kane wrote a controversial letter to me and parents of the children who attend public schools titled COVID-19 sent on June 5, at approximately 10 AM in which she claimed that racism is undisputed in our public schools. In the past three years while she was in the office and held the position of the Superintendent, there has been zero reports of any racism to the Board of Education or the Sheriff. My position is that the timing of her racially charged letter and support of BLM Organization is political in nature and coincided with BLM riots and protests across the USA. She has used our children for her personal political activism which is against the law. 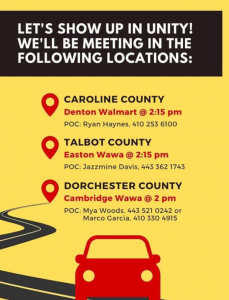 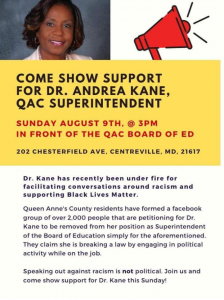 The caravan rally in support of the superintendent has meeting locations in Denton, Cambridge and Easton. Their plan is to start in those places around 2 PM and drive to the Queen Anne’s County Board of Education where they’ll gather at 3 PM to stand in support of Dr. Andrea Kane. 47 ABC is also hearing that those calling for Dr. Kane’s firing have reportedly planned a counter protest.