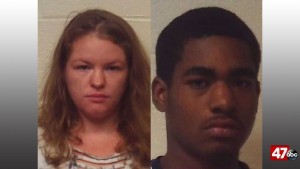 Marydel, Md. – Two people in Caroline County are facing attempted murder charges after police say they responded to a shooting on Tuesday night.

The Caroline County Sheriff’s Office says on Tuesday around 7:30 they responded 300 block of Main Street in Marydel for reports of that shooting. When they arrived, they say they noticed several shots were fired at and into a home.

Further investigation revealed that James Leon Jones Jr. and Paige Marie Mabrey came to the home to allegedly confront two people and began arguing over a defective U-Wii purchased via social media. Police say almost instantly, that argument turned physical, and that’s when they say Mabrey got a handgun from a car. When the victims went back into the home, police say Jones and Mabrey got back into their car, but when they drove away they fired shots at the home.

Jones and Mabrey were later arrested and now face charges that include attempted murder and assault of the first degree.