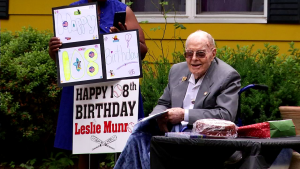 The Pine Tones Chorus sang songs to Leslie after Sen. Carozza presented him with a special proclamation from the State of Maryland. Leslie has been involved in music for most of his life, and worked as a stone mason in the early 1930’s. He even worked on washing and scrubbing the Washington Monument in Washington, D.C. with hand held wire brushes.

Leslie moved to Ocean Pines in 1976, where be became involved with the Atlantic United Methodist Church in Ocean City. He sang in the bass section in the choir there. Leslie also helped to organize the Worcester Chorale, and sang with the Pine Tones for close to 30 years.

Munro’s son, Paul Munro, says his father has been a fixture in the Snow Hill community for decades. “He’s done various stuff. He’s worked in the Ocean Pines Organization for several years. He’s been active in the church,” said Munro.

Paul Munro says that it was wonderful to see everyone come out and celebrate him. “It surprised me. Yes. I didn’t think it was going to be this big of an affair, but it was,” said Munro.

When Leslie was asked what his secret is for living so long he said to just keep breathing.

"June and July we have had a huge increase in business," : One Cambridge business is booming during the pandemic

Annual Appeal Fundraiser being put on with changes, donor will match donations up to $10K