Reporter streams own arrest on Facebook live at Dover protest 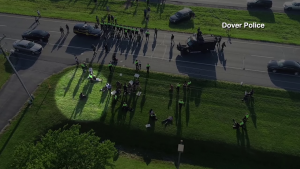 DOVER, Del. – What started as a seemingly peaceful protest turned into nearly two dozen arrests on Tuesday night, one of those arrests being a journalist who works for the Dover Post.

After other protesters are arrested, officers approach Lamar and begin to arrest him, as he tells them he’s with the press. The video ends shortly after Lamar tells police, once more, that he’s with the media.

“Sir, I’m with the press!” he can be heard saying.

Dover Police, in a statement of their own, say the journalist was arrested after he was seen rummaging through his backpack and an officer “believed this to be public and officer safety concern in that moment.”

A spokesperson for the police department says officer did see Lamar’s press badge, but wanted to confirm that he was in fact media before releasing him.  After his media credentials were confirmed, Lamar was released, and logged back onto Facebook saying the day’s events were another example of strained relationships with officers.

“There’s huge distrust issues with police, and it’s been longstanding for 400 years,” Lamar said int he later Facebook video. “Today was yet another storied incident of what that looks like.”

Governor John Carney took to twitter last night to immediately condemn the actions of officers, saying “Reporters have a fundamental right to cover the demonstrations we’re seeing in Delaware and across our country. They should not be arrested for doing their jobs. That’s not acceptable.”