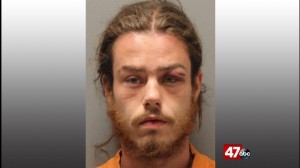 On Sunday afternoon, troopers were dispatched to Popeyes Chicken located at 15505 N. DuPont Hwy for a reported disorderly subject in the restaurant.

According to investigations, the subject, 24 year-old Dallas J. Aiken, had been asked to leave the restaurant because customers were not allowed inside due to Covid-19 restrictions. Aiken refused to leave and began flipping multiple tables and chairs in the dining room. He left after several minutes but returned inside.

He approached the counter where a 17-year-old female employee was standing. He proceeded to shove the cash register at the young employee. He left a second time but again returned to continue to cause more damage to the restaurant. There were six employees at the restaurant, four had escaped through the back door and two locked themselves inside an office.

Aiken eventually left the business on foot and was later found by troopers in the back parking lot of Walgreens at 1413 N DuPont Hwy. When troopers approached Aiken, he refused to follow orders. After multiple attempts to get him to comply, he was tazed and taken into custody.

Aiken was transported to an area hospital where he was treated and released. Then he was taken to Troop 2 and charged with the following crimes:

Aiken was held at the Justice of the Peace Court and released on a $13,000.00 unsecured bond.