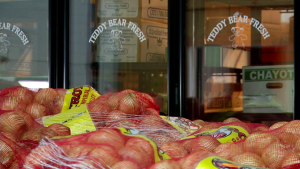 EASTON, Md. – State leaders gathered in Easton on Friday to bring attention to the Farmers to Families Food Box Program.

Both the Maryland and United States Secretaries of Agriculture along with Congressman Andy Harris got together and met with the distributor Teddy Bear Fresh to speak about this program. The program allows distributors like Teddy Bear Fresh, whose work has been impacted by the closure of places like restaurants, to buy three-million dollars worth of produce, dairy and meat from farmers. From there, that produce gets delivered to families in need. Officials say this program is beneficial to everyone involved because many have been struggling during the pandemic.

“It not only gives them business during this time when they can really feel the crunch of a lot of places being shut down they usually dealt with but also gets food out to the general population who need it the most,” says Joe Bartenfelder, the Maryland Secretary of Agriculture.

Congressman Andy Harris says they plan to deliver 40 million boxes by the end of June. So far they have delivered five million boxes.