It was also a dry month with just 3.14″ of rain, and that is 1.28″ below average for the month. The wettest day in March was on the 23rd when 0.54″ of rain fell. There was also no measurable snow recorded for the entire month.

Below is an image from the National Weather Service in Wakefield, VA, and it shows how much above or below average each day of the month was. As you can see, the overwhelming majority of March 2020 was above average. 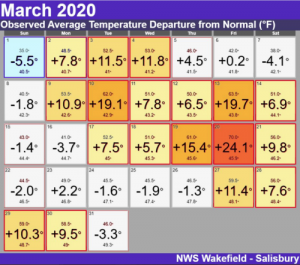 The Latest: Greece makes a bid to save its tourism season

The Latest: Greece makes a bid to save its tourism season