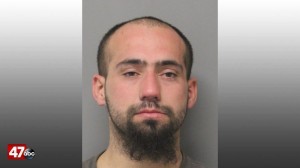 SEAFORD, Del. – On Sunday, Delaware State Police arrested 30-year-old, Robert Barger Jr., on multiple motor vehicle thefts, commercial burglaries, and other related charges. Police say the investigation revealed the first incident occurred on March 3rd after police responded to the Bi-Rite Auto Sales in Seaford, in reference to a burglary. That’s where police say a suspect forced entry into the business by using a pry tool and began prying a window open at the back of the business. The stolen items included money, electronics and two sets of keys. Police say the suspect also proceeded to eat a container of ice cream that he found in the freezer of the store. The next incident was investigated on March 8th after police responded to Bi-Rite Auto Sales again for another burglary. This time, police say two cars were stolen from the lot. The cars included a 2008 Ford F-350 and a 2005 Ford F-150. Investigators eventually found the F-150 in the rear parking lot of a liquor store near Bi-Rite Auto Sales. Officials tell 47 ABC – detectives received information that the suspect was last seen hanging out in the stolen black Ford F350 in the parking lot of Food Lion in Laurel. That’s when the Laurel Police Department responded to the area and as able to find the stolen 2008 F-350 where Barger Jr. was sitting inside. Police arrested Barger Jr. who now faces a slew of charges including motor vehicle theft and third-degree burglary. Barger was arraigned before the Justice of the Peace Court and committed to the Sussex Correctional Institution in default of $21,500.00 cash bond.