FRUITLAND, Md. – Tucked away in a small building in Fruitland, you’ll find Clifford Cottman, one of just a handful of traditional shoe repairmen left in the region.

Clifford, better known as as Cliff or Te’Jay for short, has become quite the legend among shoe lovers here on the shore.

Cottman said, “No strangers come in my door.”

People go to Cliff not only for his talent, but also for the way he makes them smile.

Cottman said, “I like them feeling that they’re welcome.”

Cottman started working with shoes when he was just thirteen.

“I didn’t want to work in the field. I went into the field a couple times to do some work then I ran across somebody said, ‘Why don’t you learn how to shine shoes?’ So I started shining shoes instead of going in the field and picking beans and stuff,” he said. 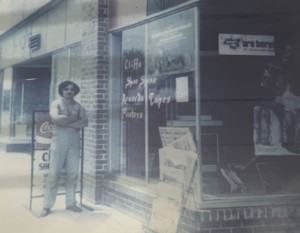 When Cliff was older, he opened his own shoe shining shop in Downtown Salisbury (pictured to the left).

Cottman said, “One thing led to another and then [I opened] my first shoe shop there in Salisbury on Main Street.”

After a few years, Cliff ended up moving down to Georgia with his wife. It was there that he opened up his first ever shoe repair shop.

Cottman said, “The rest of it is history. I’ve been fixing shoes ever since.”

Cliff made quite the name for himself in Georgia. He served patrons as famous as Kenny Rogers.

Eventually, Cliff found himself back on the Eastern Shore working in a new shop he called Old to New Shoe Repair.

Luckily for us, Cliff brought back with him some of that good old southern hospitality that he is known so well for. He also brought back talent that’s hard to find anywhere else.

“I put my little extra on my work,” he said.

So the next time you need a shoe repair, you know where you can find Cliff… tucked away in a small building in Fruitland.

If you want more information on Cliff’s shoe repair, you can visit his Facebook page Old To New Shoe Repair.

Pets on the Plaza: Meet David