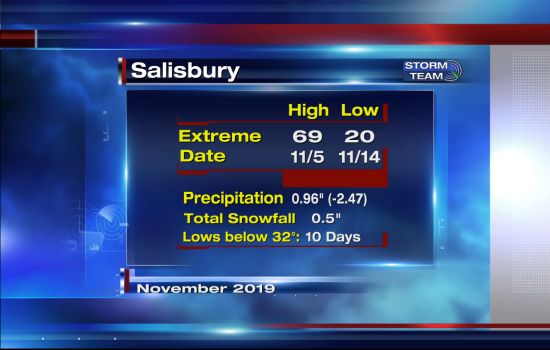 November 2019 was an interesting month on Delmarva; as it experienced chilly times with little rain, but actually included an early start to snow.

Temperatures throughout all of Delmarva were below average during the month of November; ranging from almost 3° below normal in Ocean City, to over 4.5° below normal in Wallops Island. Multiple cold fronts especially during the 2nd half of the month allowed this cool setup to happen on the peninsula. All 4 weather stations (Georgetown, Ocean City, Wallops and Salisbury) reported at least 9 days with lows at or below freezing, with Salisbury topping out the list at 11 days.

Highs above 60° were most common before the 12th, in which it occurred 8 times in Salisbury. Salisbury and Wallops did not record a 70° day in November, while Ocean City topped out at 71° on the 1st. Georgetown managed to achieve the 70° plateau twice, on the 5th and 11th respectively.

Rainfall for Delmarva was below average for the month of November. Luckily, the cooler temperatures did not worsen the drought conditions despite the minimal precipitation. Salisbury had its driest month in 3 years, receiving 0.96″ of rain; which is below average by almost 2.5″. The last time Salisbury received less than an inch of monthly rainfall was on November 2016. On the other hand, Wallops received the most, just slightly above 2″, but still below normal by less than an inch. Georgetown and Ocean City accumulated between 1″-2″ for the month.

The highlight of the month was on 12th of November, when snow fell over the peninsula. Salisbury recorded its 1st time November snowfall since 1989. Salisbury received a half of an inch of snow that day, while Ocean City received a trace amount.

While the month of November provided intriguing moments of snow, rain and temperatures, will December be as interesting?  Tune in to our Storm Team to find out how December will play out and for all the latest weather updates.