The last two Octobers have been quite different on Delmarva from the way summer has come to a conclusion, to the varying amounts of rainfall. October 2018 was defined by the heavy rain from Michael, along with its abrupt transition to autumn after the storm. October 2019, however has been defined thus far by the worsening drought and coastal flooding from a storm in the Atlantic.

October 2018 started off with summer-like conditions, as 9 of the 1st 12 days got above 80°. Temperatures were quite warm to the start the month, that only 1 day got a low below 55°. However, big changes were on the way by the 11th, as a powerful cold front steered Michael over Delmarva.  This front would offically set up the autumn season and planned to stay for the remainder of the month. The autumn air settled to the point where the rest of the month would not achieve 80° after Michael’s passage; swiftly being replaced with 50s and 60s for highs and 30s and 40s for lows. 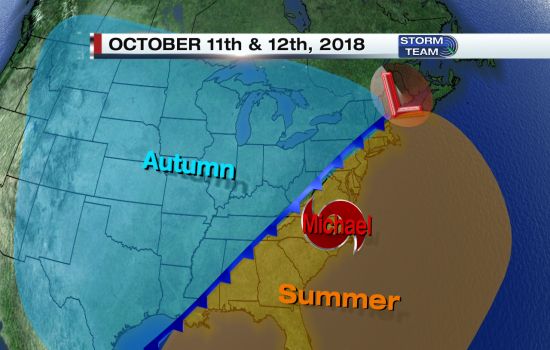 Rainfall was actually dry to start last October with only 0.01″ recorded through the 1st 10 days. However, that all changed when Michael arrived late on October 11th bringing record rainfall that would continue early into the 12th. Salisbury recorded over 7 inches of rain from Michael and would add an additional 1.5″ for the rest of the month. The month would end with 8.67″, making it the 4th wettest October on record. 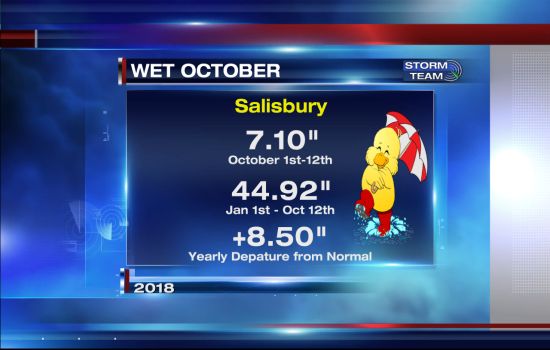 Temperatures once again started off toasty this October, with unseasonably heat achieved on October 2nd, where record highs were broken in Georgetown, Wallops & Salisbury. The high of 96° was tied for the 3rd warmest October temperature in Salisbury. Luckily, a cold front would arrive the next day to break the abnormal summer warmth; with temperatures hitting 80° or above once since that record summer-like day. The reason for the seasonable temperatures during the early portion of the month is due to cold fronts that would later stall, which brought the cooler air, but also kept our skies mostly cloudy. 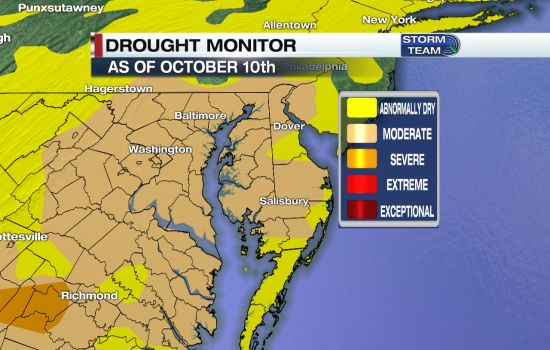 October 2019 picks up with the abnormally dry weather that September left off. The month of October began with moderate drought affecting the Mid Shore, before spreading through most of the peninsula during the 2nd week of the month. Ironically, a stalled front produced mostly cloudy skies during the 2nd week; which brought considerable cloudiness, but the rain  was suppressed due to the drier air. A low pressure formed from that front which would became Subtropical then Tropical Melissa; which actually brought coastal flooding over Delmarva, despite the storm being hundreds of miles away in the Atlantic.  During the month of October, Salisbury has received just shy of a fifth of an inch of rain, which is actually over an inch below average for the month. 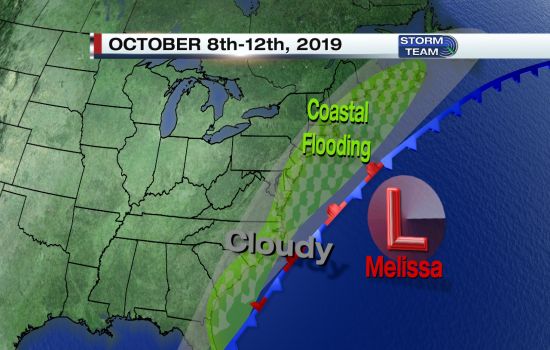 This biggest difference from both Octobers is the rainfall amounts, not just for the month but even for the entire year.  The yearly total for 2019 thus far is just slightly below 31″, compared to almost 45″ back in 2018. This is a difference of 14 inches in just one year. The departure of yearly average shows this disparity from being currently below average by over 5.5″ to being above average 8.5″ just last year. The most interesting thing is that the month of October has the largest difference of rainfall between last year and this year, when comparing the 1st 9 months of this year versus last year. The difference in rainfall is almost a staggering 7 inches, and that is including the fact that September 2019 was our driest month in almost 2 years. 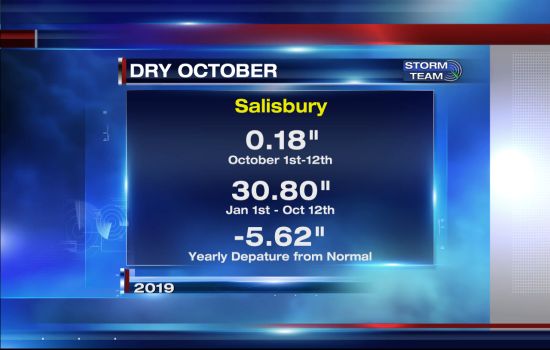 The rest of the month looks to be a swing of fluctuating temperatures for the rest of the month from below to above average, however it does lean to above average as a whole for the entire month by the Climate Prediction Center. It does get tricky with the rainfall, as the next 7 days show our best rain chance on Wednesday, but the other 6 days showing dry weather intact. However, the CPC predicts for a wetter than average week from the 22nd to the 28th, but indicates the month could likely end below average to near average. Stay tuned with our Storm Team for the latest weather updates throughout this fall.

The Latest: US to advise health care workers to reuse PPE