Police remind drivers how to be safe around school buses

47 ABC – This week is National School Bus Safety Week so police across the peninsula are taking this as a chance to remind you how to safely drive near a school bus. 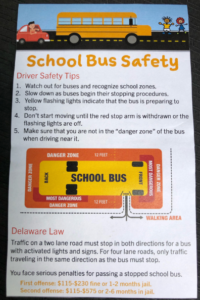 Local police officers tell 47 ABC the most common problem they see is drivers illegally passing school buses. The general rule of thumb is you have to stop for a school bus when the stop arm is extended if they are traveling in the same direction as you. You also have to stop for a bus if you are driving in the opposite direction unless there’s a median between you and the bus.

The State of Delaware surveyed about 1,100 bus drivers in May of this year to see how many times they were illegally passed and the results might surprise you.

“There were over 680 buses that were passed that day. So those are statistics that really caused us some major concern and we want the public to be aware not only of the law but be aware that these are prized possessions on these buses,” says Detective Joey Melvin with the Georgetown Police Department.

If you are caught illegally passing a school bus you could face a fine up to $230 in Delaware or up to $500 in Maryland.