MILLSBORO, Del. – There was a symbolic celebration for Indigenous People’s Day in Millsboro, on Monday, as the Nanticoke Indian Tribe held a dedication for its new historic marker.

“We were the first inhabitants of the first state but more importantly we’re still here. We still exist. We’re still persevering,” says Bonnie Hall, the chair for the Nanticoke Indian Tribe Commemoration Committee.

The marker honors the Askekesky Reservation. “People are aware of us. They are proud of us. And we’re proud of ourselves. The town of Millsboro is proud of us,” says Sterling Street, a member of the Nanticoke Indian Tribe.

This sign commemorates the reservation that was created in 1711 for the Indian River Native Americans, made up of Assateague and Nanticoke Indians. 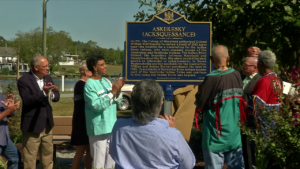 It was been more than a year in the making but will serve generations to come. “We have to show them how to take pride in their heritage, in their culture, in their history you can’t do that if you don’t have landmarks that are dedicated,” says Hall.

Members of the Nanticoke Indian Tribe say the marker is also symbolic of their hopes for the future. “Unity and harmony among all people. I know that’s a lofty goal but it has to start somewhere,” says Hall. “Our history is worth saving. It’s worth preserving.”

Officials say they put the marker, in Millsboro’s Cupola Park, so that plenty of people would see it with the hope that this history will never be forgotten. Members of the Nanticoke Tribe believe there will be a lot more in and around Millsboro, in the future, to show their history and presence.

The tribe is also having a Native American Day at its museum in November that the community is welcome to attend.