September 11, 2001 is a day that we will never forget. What many people don’t realize, is the weather that day could have completely changed history.

Hurricane Erin was approximately 500 miles off the coast of New York City. If this storm had been closer to the coast, flight delays or cancellations would have been likely.

The day before, a cold front pushed across the East Coast. This provided clear, blue skies for the majority of the Northeast and Mid-Atlantic on September 11. This front is also one of the reasons Hurricane Erin was pushed well offshore.

Below is a satellite image from NASA of Hurricane Erin on September 11, 2001, with a zoomed in view of the smoke plume from the Twin Towers. 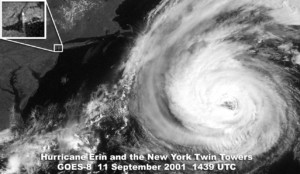