Linchester Mill was first built around 1827 but as the owners brought in more equipment, they expanded the building.

The Linchester Mill is a technology hybrid containing inventions from the late 18th century and late 19th century.

Inventor, Oliver Evans came up with a system of water-powered machines fueled by a big wheel.

Historians say Evans was inspired to create the invention while visiting his sister in Caroline County.

“Mills were operating with about six men and a boy. Oliver Evans technology part of it was the elevator which would move the grain rather than picking it up and carrying it”, says Walsh.

Only a couple people were needed to be there to produce about 300 bushels of grain each day.

It made milling a profitable business to go into.

“this wasn’t the only mill in Caroline county. Caroline County is perfectly suited for building mill ponds and therefore we had a 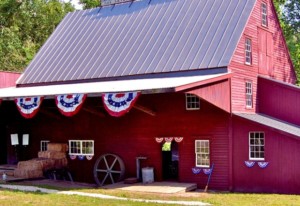 lot of mills. In fact, Caroline County had about 25 mills,” says Walsh.

Although the Linchester Mill wasn’t the first of its kind in the area, it was the last one operating when it closed its doors in 1979.

“They had an enormous rainstorm here and the water ran into the mill pond and the mill dam broke”, shares Walsh.

JOK says the last owner’s daughter at the time didn’t want the dam repaired, so the Linchester Mill sat dormant until the Preservation Society stepped in to save the building.

The site of the mill has several other buildings, including a miller’s house and a one-room school house moved over from Hog Island.

Its a project the Caroline County Preservation society is very proud of.

The Linchester Mill was added to the National Registry of Historic Places in 2009.