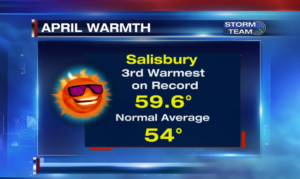 April 2019 proved to be a warm month overall. It will officially go down as Salisbury’s third warmest April on record. And not that we need a reminder, but it was also a month full of severe weather with three tornadoes touching down on April 15th. One in Federalsburg, MD, Laurel, DE, and Broadkill Beach, DE.

The average overall temperature for the month of April is 54 degrees, but the average for April 2019 ended up being 59.6 degrees, which is 5.6 degrees above average.

We’re already off to a warm start for the month of May and the Climate Prediction Center is forecasting a continuation of above normal temperatures and precipitation over the next 6-10 days. Take a look at their forecast below. 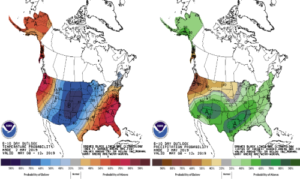