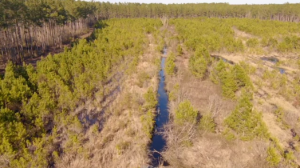 SALISBURY, Md. – It’s a project that’s restoring cedar swamps on the Eastern Shore, one that requires not just environmentalists and scientists but local kids too.

We’re in the Nassawango Creek Preserve, we’re right at the heart of it and we’re standing by the edge of Nasawango Creek,” explains Deborah Landau, a Nature Conservancy ecologist.

It’s a place where Atlantic White Cedars can stand tall, a tree that’s on the verge of becoming extinct in Maryland.

“So these Atlantic white cedar swamps are almost 75 percent gone from the area.”

That’s why the Nature Conservancy is working to restore entire ecosystems where Atlantic White Cedars can thrive and grow, places like Nassawango Creek on the Eastern Shore.

But in order to do that, they need a little help from the National Aquarium and some energetic kids from Berlin Intermediate ready to plant these trees essentially in their backyard.

Maura Duffy of the National Aquarium explains, “We work with local students, three middle schools in Worcester County, where we visit their schools in the fall we provide them with 250 Atlantic White Cedars and they then pot those cedars into pots of soil at their school yard.”

Fast forward to spring and these trees they cared for are ready to turn this overgrown field into a future Atlantic white cedar swamp. A task that isn’t just a win for nature but a win for the kids too.

Even though it may not look like much right now — in ten, even twenty years from now…the hope is that this area will evolve into a mature Atlantic White Cedar swamp.

It’s a project that’s been going on for 10 years now, one that not only is helping the local environment but also teaching students valuable lessons.

Berlin Intermediate teacher, Steve Whelan, explains, “They are able to see that what they do in the environment matters and that they have a hand in future environmental projects.”

A project that has a lasting imprint on everyone and every area involved.

“It just really feels weird that I could come back here in like 10, 20 years and just see what I did back when I was in 6th grade,” explains Shawn Vick, a sixth grader at Berlin Intermediate.

“It was such a wonderful success the first year that now 10 years later it’s a natural part of what we do and it’s just terrific,” adds Landau.