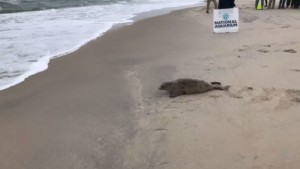 WORCESTER CO., Md. – The National Aquarium, based in Baltimore, traveled to Assateague State Park to release a harp seal back into the Atlantic Ocean, on Friday.

The seal, named Marie Tharp, can be seen in the aquarium’s video, shared on Facebook. The young seal was in rehab for about two months and was treated for dehydration, malnourishment, respiratory distress and was placed on antibiotics to fight internal infections. She’s healthy now and was very happy to be back out on the beach.

If you or someone you know spots a stranded animal on the beach, you’re required by law to keep your distance and are encouraged to call your local Stranding Hotline. In Maryland, call 1-800-628-9944 to report the animal to the Maryland Natural Resource Police, or the National Aquarium’s Stranding Hotline at 410-576-3880.

You can watch the whole release video here on Facebook.