Del. Department of Corrections installs hundreds of cameras at JTVCC 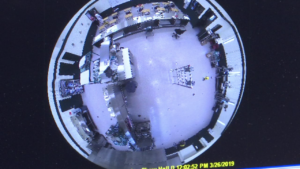 SMYRNA, Del. – Two years ago, a sergeant was murdered while working at the James T. Vaughn Correctional Center, a tragedy that could’ve been prevented and more importantly prosecuted fully if new technology was used.

Now, 714 security cameras are now installed at Delaware’s largest adult male correctional facility. This project was supposed to take two years, but the state finished it in just 14 months. As for the effort and the plan, it was in response to Governor John Carney’s Independent Review.

Phillip Winder, DOC’s Director of Information Technology says, “They can select whatever cameras they need to view and bring up anyone of those from the central command point.”

Support came rolling in after the fatal uprising in February 2017 when Lieutenant Steven Floyd died during the prison takeover. $2.5 million has put more eyes in JTVCC, which houses approximately 2,500 inmates.

Warden Dana Metzger tells us, “The additional security we’re getting with the camera systems it makes us a much more safer facility then it’s ever been in the history of James T. Vaughn.”

Prior to this, some of the buildings didn’t have any video surveillance. We’re told having these cameras will also be an effective tool to do a better job. “If we want to practice working on cell extractions or working on different movements in techniques and now we can go back to the camera systems and put it in slow motion or see who’s doing a really good job and what we need to work on procedure wise,” Warden Metzger tells us.

The installation process started in July, but now that every single one is placed, it will help CO’s and inmates feel a bit safer.

47 ABC asked Geoff Klopp, the correctional officer union president, if these cameras were in ‘C building’ three years ago, if he thinks the riot could have been prevented. He says the whole situation was preventable, so these cameras wouldn’t specifically have stopped it but he says this will now hold people more accountable. For example, the Vaughn riot trials had little to no evidence. Klopp says these cameras would have given the prosecution what they were looking for and it’s imperative now moving forward.