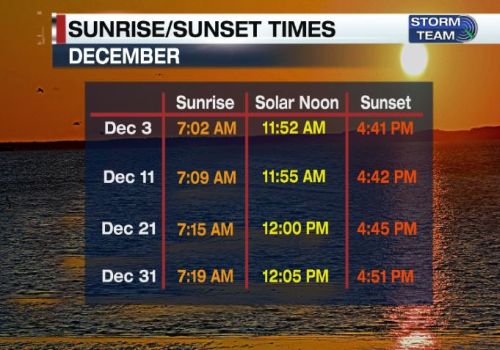 As the winter solstice approaches over the next week, you might have questions when it comes to sunrises and sunsets for the shortest day of the year.  The biggest misconception for the winter and even summer solstices is that it’s the extremes (earliest or latest) for their sunset and sunrise times but that is not the case. One of those factors will be explored in this blog while focusing on the earliest sunset of the year.

The first thing to understand is the difference between a day and a solar day. A day is exactly 24 hours but a solar day is not exactly 24 hours because the earth’s elliptical orbit. The solar day is determined by taking the duration between the solar noon (the highest point or angle in the sky) of one day to the next. This creates for slightly longer than 24 hours during the solstices and slightly less than 24 hours during the equinoxes.  This is due because of how north or south the sun must travel from the earth’s equator. Also the solar noon of a day does not occur at noon on your watch or clock, and can take place before or after noon depending on your location within a time zone and timing during the year. The increases or decreases in the solar noon play a role on when the sunsets and sunrises take place each day.

In Salisbury, we easily see our sunsets becoming earlier throughout the month of November after daylight savings end and each sunset since the fall back occurs before 5 PM. By the last day of November, we are only a minute away (4:42 PM) from our earliest sunset of the year. The earliest sunsets of 2018 take place on December 3 and continue for an entire week until December 10 at 4:41PM. Sunsets after this date become later in the afternoon to around 4:45 PM on the winter solstice (Friday, December 21st) and 4:51 on New Year’s Eve (December 31st). The 1st sunset after 5 PM in standard time or since falling back does not take place until January 10th.

Since the earliest sunset was achieved before the solstice, in order to acquire the shortest day on the winter solstice, our sunrises will continue to arrive later throughout the month of December. The effect of a later sunrise and sunset, leads to a solar noon to take place a bit later in the day. Next blog will focus on the latest sunrise and another factor that plays into the sunrise and sunset times. Things work out a bit differently as the summer solstice nears in June, which will be explained at a later time.

Unless you are an early bird, the good news is that our afternoons are getting longer while mornings get shorter despite the shortest day of the year being upon us. Have a great winter!