Three lifeguards honored with highest award given by the Red Cross

ASSATEAGUE ISLAND, Md. –  Three lifeguards were honored in Assateague Saturday for their heroic actions taken in the face of tragedy on October 7th.

One of those honored said they train for these scenarios daily, but having two drownings in one day was “unimaginable.” 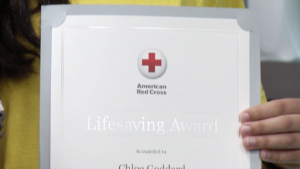 While the swimmers sadly didn’t make it, the three lifeguards who responded were honored Saturday with a national award, the American Red Cross Life Saving Award. It’s the highest award given by the Red Cross to people who save or sustain a life using skills learned in a Red Cross Training Services course.

“I teach to my classes all the time this option exists in the Red Cross, to nominate someone for an award, and I said these are the perfect candidates,” said Owen Long, the lifeguard who nominated the trio.

One of the honorees, a Snow Hill junior, describes what it was like when those distress calls came in early in the afternoon.

“I saw him in the water and so I swam out, everyone did what they were supposed to, we pulled him out,” said Chloe Goddard, a lifeguard at Assateague honored.

“Only three of us are being mentioned today, however three was close to 30 people at that incident and even more on the second one,” said Sheldon Dawson, Captain of the Beach Patrol at Assateague State Park.

We’re told the second call came in from the same location.

“I ran in just to see maybe I’d see him. And I saw her point out to him as she’s running into the water and so I started swimming after him,” said Goddard.

Though the two individuals who were rescued from the waters on that day did drown, their bodies were recovered thanks to the rescue efforts of these three individuals.

“The second guy, no one would’ve gotten him. He would’ve been out there, it’s possible his family never would’ve seen him again. They wouldn’t have that reassurance that at least something was tried,” said Goddard.

Dawson said they were accepting the awards on behalf of all first responders, many of whom do not receive the recognition they deserve.

Those we spoke with say it’s important to know basic life saving skills in case an emergency ever presents itself.

For more on how you can receive this training you can go here.