Recount requested after Wico. Board of Ed. candidate wins by one vote 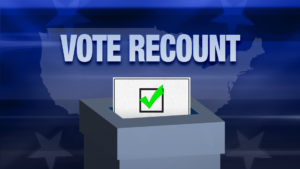 SALISBURY, Md. – Officials announced that they will recount ballots that were cast for the Wicomico County Board of Education District 3 position, in the November 2018 General Election, after a candidate won by one vote.

Anthony Gutierrez, the Election Director, announced the recount on Monday. He said, “Candidate David Goslee has requested a manual recount of voted paper ballots involved in the recount.”

According to Maryland’s State Board of Elections website, William Turner won District 3 by one vote, receiving a total of 3,056 votes. Meanwhile, David Goslee received 3,055 votes.

For more information, you can contact the Wicomico County Board of Elections at 410-548-4830.

This was the first time that Wicomico County residents elected their Board of Education members.