WILMINGTON, Del. – Election Night turned into a party for Democrats early, as they won both seats open in the United States legislature Tuesday night.

Leading the way was an early call from the AP for incumbent Senator Tom Carper, who won a fourth term.  Carper defeated Sussex County Councilman Rob Arlett with 60 percent of the vote.

The number one topic for Carper as he returns to Washington will be continuing environmental work, especially to combat climate change.

“There’s a number of ways that we can address global warming and do it in ways that create jobs, and job creation is like 3 million.  Jobs are already in energy efficiency, sustainable energy and we can do a whole lot better in that way.”

Carper returns to a senate controlled by the GOP, with a republican in the White House.  He says he understands the balancing act that comes with working with the other side of the aisle. 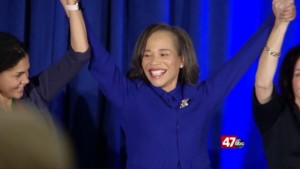 The congresswoman says she was inspired by the amount of women and new people getting involved in the process this election cycle.