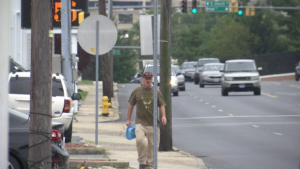 SALISBURY, Md. – The City of Salisbury was awarded more than 700,000 dollars by the Maryland Department of Transportation as part of its Rail-to-Trail project that is expected to better serve its pedestrians.

“A lot of bicyclists are intimidated by going on a highway like Route 13, so we want to give an option that’s off of a road that’s in a protected and dedicated place for bicyclists,” said Amanda Pollack, the City of Salisbury Infrastructure and Development Director.

According to Mayor Jake Day, there will be more sidewalks built near historical railroad tracks like at the Union Station that are safer areas for people who travel on foot.

“This will be a safe protected off-street trail that ensures people have an easy and accessible pathway from their home to work,” said Day.

“The tracks will remain as is,” said Pollack.

“This trail will be set away from it, and we work with railroad standards to make sure we’re far enough away from it,” said Pollack.

In addition, Mayor Day also said that the new construction is great news for local businesses that are near the tracks because they will benefit from an increase in the number of pedestrians using the sidewalks.

“It will also spur private investment,” said the mayor, “I mean we’re right out of the Evolution Craft Brewing and the Union Station, and I mean this could be an incredible asset.”

City officials also said that the new project will be a great way to better protect Salisbury University students and residents from traffic in the years to come.

“I know students like my friends and stuff we walk to places all the time,” said Allison Messick, a freshman student at Salisbury University.

“Our cars are parked far away, so we can’t really drive everywhere, so we depend on sidewalks to get us from place to place safely,” said Messick.

According to city officials, the new grant money is only part of the first phase of a 9-million dollar project that is expected to be completed within the next five to ten years.

They said the first phase will be completed by 2020 and will connect different communal areas like the athletic complex on Naylor Mill Road.

Could more countries joining NATO have an impact on US spending? A local professor weighs in