Is Saturday’s equinox really an equinox?

If you been outside lately it’s been feeling more like summer, but in actuality we are approaching autumn this weekend. The autumnal equinox takes place this Saturday, September 22nd at 9:54 PM.

The sun will be over the equator during the equinoxes but after Saturday the sun will be over the southern hemisphere. Equinox is Latin for equal nights but if you read the sunset and sunrise times of any location on Delmarva, you do not receive equal amounts of daylight and nighttime on the equinox.  The reason for the disparity on day length on the equinox is because of what sunrise and sunset are defined but also the refraction of light on the earth’s atmosphere. 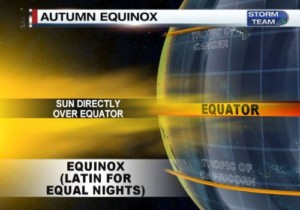 Sunrise is defined as when the sun’s first disk is visible above the horizon, while sunset as when the sun’s last rim drops below the horizon.  Because of this definition, it actually takes minutes for the entire sun to rise and set each day thus adding some extra time to the day. Light refracts on the earth’s atmosphere allowing the presence of sunrise to be seen minutes earlier than in actuality and also give a few extra minutes to the sunset after going below the horizon. Keep in mind that how much of the refraction depends on the atmospheric elements such as temperature, pressure and even humidity.

These are the main reasons that the northern hemisphere experiences 12 hours of daylight for the 1st time around mid-March which is about 4 or 5 days before the vernal equinox and experience 12 hours of daylight for the last time during the last week of September about 4 or 5 days after the autumnal equinox. The amount of days in the year at or above 12 hours is fewest towards the poles and highest towards the tropics. 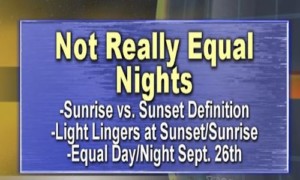 Autumn also has the latest start to the 4 seasons as it usually starts on the 22nd or 23rd of September compared to spring which is around March 20th or 21st; with summer and winter starting on June 21st or 22nd and December 21st or 22nd, respectively.

Salisbury experiences 12 hours of daylight for the 1st time on March 17th while its last day of 12 hours of daylight on September 26th. Also the amount of daylight from one day to another is greatest around the equinoxes because of the tilt of the earth; with higher latitudes have the greatest difference from one day to another. Salisbury’s day length difference in March and September is 2.5 minutes compared to Juneau, Alaska at 5 minutes and Kingston, Jamaica at 1 minute.