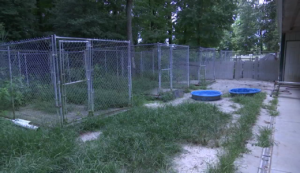 POCOMOKE, Md – A woman who once dominated the headlines for losing 40 German Shepherds at the hands of animal control officers is now fighting back.
Linda Brown, owner of Jolindy’s German shepherd’s tells us she’s now suing Somerset County Dog Control to get those dogs back. Brown says she’s willing to do whatever it takes to get her 40 German shepherds back in her care after they were taken for alleged neglect. Last month the Somerset County Sheriff’s Office and Dog Control took brown’s animals after receiving a complaint from one prospective buyer. Police say they found cages with feces piled up high inside them and It reportedly took three hours to get all the dogs out of the home. But, Brown says that all of her dogs are well taken care of and authorities had no right to take them. Which is also part of her suit, Brown believes the county has no reason to hold her animals, and she’s also seeking $10,000 in damages. To find out more about this claim we caught up with Somerset County Sheriff Ronnie Howard who gave an update on how the dogs are doing at this time.

“We executed a search and seizure warrant there, we seized approximately 40 dogs and they are currently at the Somerset County Dog Control where they are being cared for by the veterinarian from the Somerset Animal Hospital,” said Howard.

47 did reach out for a comment from officials with the Somerset County Dog Control, but they were not able to speak on the matter at this time. We did attempt to reach out to Brown’s lawyer as well but she was also not available for comment. We will continue to watch this suit – and provide you any new information as it becomes available.