Overdoses and deaths from opioids continue to be at the forefront of conversations in cities and towns across the eastern shore.  And Caroline County has not been spared.

Friday marked Overdose Awareness Day around the nation, and in Denton, the local Next Generation Chruch was packed with folks hoping to learn more about resources nearby, and to campaign for change at the national level. 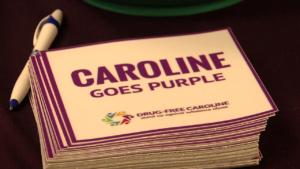 The organization Mid Shore Restoring Hope in Women led a Fed Up rally as part of a nationwide campaign to address the opioid crisis.

Local advocates at the grassroots level went around talking to folks in hopes of pointing them in the right direction.

One of those advocates says the county health department has the resources that helped him get his life pointed back in the right direction.

“I sat down and I talked to the guy and I got awarded a grant to go to rehab, and it was the best thing that could’ve happened,” said Mark Litsch Jr.

The other purpose of the rally was to advocate for more funding to battle the opioid epidemic at the federal level.

“These smaller counties need the help on the shore mostly.  Because there is, right here in Caroline, we do not have any faculties to get help.  They have to go outside the county,” said event organizer Cathy Bowrey.

“Now when they say I’m ready the beds are five days to two weeks out for them,” said Litsch.   “Those beds need to be available when they need it. Not two weeks from now, because in two they may not be here with us, or they may not be just ready to do it anymore.”

This November the first Sober Living Home will be opening in Caroline County in Greensboro.