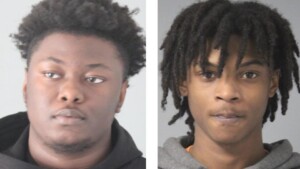 FELTON, Del. – Three arrests were made Saturday after a police pursuit in Felton.

Felton Police say an officer tried to pull a vehicle over on Route 13 for a traffic violation. The suspect vehicle pulled into the Felton Royal Farms, before speeding away, according to police. After a brief chase on East Main Street, police say three males jumped out of the vehicle, and ran away.

Police were able to capture and arrest two males a short time later. One male, who is a juvenile, had a fully loaded handgun with an extended 30 round magazine in his waistband, according to police. The driver, however, ran in an unknown direction on foot, say police.

The juvenile was charged with resisting arrest, possess/consume marijuana under 18, carrying a concealed deadly weapon, and possess/purchase/own or control of a deadly weapon. He was taken to Stevenson House in lieu of a $21,050 secured bond.

The other male was identified as 18-year-old Lavar Dickson-Lewis of Dover. He was charged with resisting arrest. Dickinson-Lewis was released on $1,000 unsecured bond, pending a later court date.

Investigators were later able to identify the driver as 18-year-old John Lewis Gregory, Jr. of Dover. He was arrested at his home on Sunday without incident.

Gregory is charged with endangering the welfare of a child, disregard a police officer signal, reckless driving, and aggressive driving. He is also charged with speeding in excess of posted limits, and failure to use a turn signal. Gregory was released on $2,303 unsecured bond, pending a later court date.