The Brightside: ‘Madam Who?’ 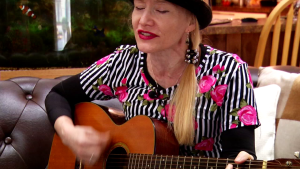 MARYLAND – A local artist was once on her way to becoming a rock star, but a few life-altering events changed her path. However, it certainly didn’t knock her down. Now she’s writing music, in hopes of inspiring those just like her.

Audra Coldiron, better known as ‘Madam Who?’ is a local artist who does it all; she plays numerous instruments, produces, sings, and writes her songs, providing uniqueness to the industry. “My favorite part I guess of the process is the arrangement, which seems to bring the whole thing alive,” says Madam Who.

Madam Who tells us, her love for music sprouted when she was just a child. “I saw the complete Beatles documentary when I was 12 on PBS and it blew me away, the day after that I started writing songs.”

Madam Who chased her dream of being a rock star, starting to see some success with her band “Audra and the Antidote.” However, her life took an unexpected turn. “In 2006 I had a seizure and was rushed to the hospital they found a mass in my brain and it turned out to be cancerous,” she tells us.

Her diagnosis changed her outlook on life, especially with a discouraging prediction from doctors on her life expectancy, but so far, she’s already beating the odds. “I have to do yearly exams but after that, I went through chemo and radiation and a lot of my hair fell out and because radiation made my hair fall out, it didn’t grow back exactly the same which is why I wear hats,” says Madam Who.

Her battle with cancer also changed her approach to music. “I have a better idea of what’s really important because when you go through cancer or something similar, you could die, so it puts your priorities in order.” It was another personal battle that helped Madam Who hone in on her target audience, women in shelters. “I spent 19 years with someone who was emotionally abusive and that also contributes to my lyrics and why I understand these women so much.” She adds, “I can inspire them with my music and tell my story.”

Madam Who says she now appreciates life more. and plays to the beat of her drum, but with a much different purpose to her lyrics. “When you write a song and you perform your songs over and over and I really get to get into the song, and I realize if I keep writing sad songs, I’m just going to be sad all the time. So I’m going to write some empowering songs it helped me out of the lowest point.”

Now as a growing, thriving, eclectic artist, Madam Who is showing women it doesn’t matter how far you get knocked down, it’s about picking your guitar back up and reclaiming your power.

Madam Who is currently in a contest called ‘FabOver40,’ which features an empowering woman who is over the age of 40, and the winner receives 40 thousand Dollars and a spread in New Beauty Magazine. She tells 47 ABC, she intends to use the money to fund a tour of women’s shelters where she can share her music and story to help encourage others.

People can vote for free, or for $1, donate to the National Breast Cancer Foundation. To vote, click here or to learn more, and check out her music, visit her website. Voting for Semi-Finalists ends Thursday the 1st of December at 7 PM PST.

The Brightside: DE Pastry Chef, life after a big win