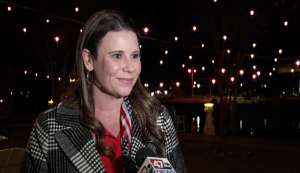 WICOMICO COUNTY, Md. – While results remain unofficial, it seems clear who will serve as the next Wicomico County Executive. As she holds a a more than 4,000 vote threshold over Democratic nominee Ernie Davis, and Libertarian candidate Muir Boda, Republican Julie Giordano is getting ready to get to work.

“We are so excited. I just couldn’t be more excited about it. We are very grateful to all the citizens of Wicomico County that backed us,” said Giordano. “We’ll have a transition team in place. We’ll be meeting together and trying to figure out the next couple of steps.”

Giordano says top issues worth tackling in the County include public safety, a water and sewer plan, and supporting Wicomico County Public Schools. However, Giordano adds she is closely watching other local races to determine how, and when, to address those topics.

“It’ll definitely be one day at a time. So, I think the biggest thing is going to be to prioritize what’s most important, and then kind of move on from there. We’re going to see how the school board races go and how the County Council races go. When all that is finalized, we’ll be able to put up a better plan,” said Giordano.

Davis did not respond to 47 ABC’s request for comment Tuesday or Wednesday, and he has not officially conceded. However, Giordano says Boda has already offered his support.

“He was actually very grateful and very wonderful. He said if I needed anything, to just let him know. I was very happy to hear that. It was very nice of him,” said Giordano.

Giordano tells 47 ABC as a political newcomer, she knows she has a lot of lessons to learn over her term. But, it’s what she took from the campaign trail that Giordano says will launch her forward as County Executive.

“I think the biggest lesson learned is that you have to work hare every single day. I think the biggest thing I learned is the power of the incumbency, and how important name recognition is,” said Giordano. “You think of being a teacher for 18 years. People know who I am, but only just in a small, little world. So, it’s getting yourself out there, talking to people, figuring out what the issues are, and figuring out the changes that you can make.”