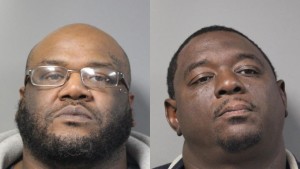 DOVER, Del. – A Thursday afternoon search warrant resulted in the arrest of two Dover men, and the seizure of guns, drugs, and cash.

Police say Dover Police Department’s Drugs, Vice and Organized Crime Unite obtained the search warrant for an apartment belonging to 46-year-old Undray Moaney, and 43-year-old Terrell Clark. Inside the apartment, police found a 9mm handgun, a .22 IR pistol, 15.2 grams of cocaine, 31.6 grams of MDMA, drug paraphernalia, and $853. Moaney and Clark were arrested without incident, and arraigned by Justice of the Peace Court #2.

Clark is charged with possession of a firearm by a prohibited person, possession of a controlled substance in a tier 2 quantity, and possession of drug paraphernalia. He was taken to Sussex Correctional Institution on $6,200 cash bail.