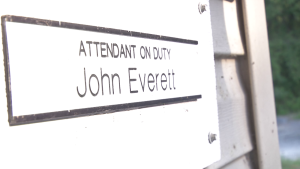 SALISBURY, Md. – Good Morning Delmarva morning anchor, Jordie Clark, is highlighting a local man, John Everett. While some may know him as the primary caretaker at the convenience/recycle center on Mount Hermon road, to others he’s a faithful servant to the community. On Wednesday, September 21st, he punched in for the last time after over 20 years and now heads to retirement. That’s why one community member made sure he felt the love.

“John is the unsung hero of the community, people need to dump their trash and their waste and their recycles and he’s here every day to do that,” says Bill Maher, a local community member going above and beyond for John Everett. Everett, a southern native turned Marylander is heading off to enjoy his retirement, but not without reflecting on his life leading up to it.

“My home is down south and I had a good life down there I worked on the golf, toted the bag for one or two years,” says Everett. He tells us, he was a caddie at the famous Augusta Nationals, even carrying golf clubs for Sam Snead. However, after all that excitement, years later he found himself on the Eastern shore and even found someone to share his life with. “Then we got married and we were married for 47 years and then she passed away five years ago and left me by myself so here I am,” says Everett.

Everett has worked for the county for over 20 years even after working elsewhere for 33 years. However, his friendly familiar face has been a constant for community members.  “I’ve only been here four years myself and my wife and I have been here four years and I’ve become friends with John and I’m going to miss him,” says Maher.

Maher tells 47 ABC, over the past few years he would stop to visit Everett and just sit and talk keeping him company, and learning all about his life. “It gets lonesome down here and if you’ve got somebody coming to talk to you, that seems like it lifts you and he’ll do it,” says Everett.

We’re told, Everett has met hundreds of people, good, and bad, but it’s the good ones that have made his job so enjoyable. “I’m going to miss the people, especially like him, that’s a nice person there, yes indeed,” Everett refers to his friend Maher. While Maher made sure Everett felt the love in return, leaving him almost speechless. “I don’t know what to say,” Everett tells 47 ABC Jordie Clark. Clark asks if it made him happy, and he replies with a smile and welds up tears in his eyes, “Oh yes, it did. I feel pretty good and I’m kind of proud that I’ve been here so long and I’m leaving out.”

Everett also shared some advice for young community members when wondering how to make it in a career that long, he says to take it one day at a time and enjoy what you do. He will also be celebrating his 89th birthday next month.

Cooking with Lynn: Season of apples