DOVER, Del. – Residents along a stretch of road in Dover are speaking out against a project that DelDOT hopes will address longstanding drainage and safety concerns.

The project would see residents on Walnut Shade lose parts of their properties, and while DelDOT officials have made it clear they would be compensated, many aren’t happy about it.

“I can’t live here, with the road being here, I can’t live here,” explained Faye Wing who lives at the intersection of Millchop Lane and Walnut Shade. “If they take the 30 feet from the road to the back of my house, I’ll have 20 feet left from the time I walk out my door to where the road is.”

With tears rolling down her eyes, Wing pointed to the end of her porch where the road would be, just feet away from her front door and said: “I will eventually lose my home because I cannot live on the road if they take that much from me.”

Several more residents, from up and down the road, expressed similar concerns.

Right across the street, Brian Webster and his wife were also concerned over the portion of  property they would lose if the project moves forward, and how it could potentially affect their children playing in the front yard.

“I have three young kids and I’m worried that if they want to go outside and play that there’s a chance that they’ll get hit,” Webster said. “I don’t feel that it’s right that they can just come in and take what they want. They’ve been very shady about everything.”

That’s just one of several concerns DelDOT is trying to address by widening the street, putting in a sidewalk, and installing a roundabout. Director of Community Relations, C.R. McLeod said the entire project stems from a safety standpoint and has been in the works for years. 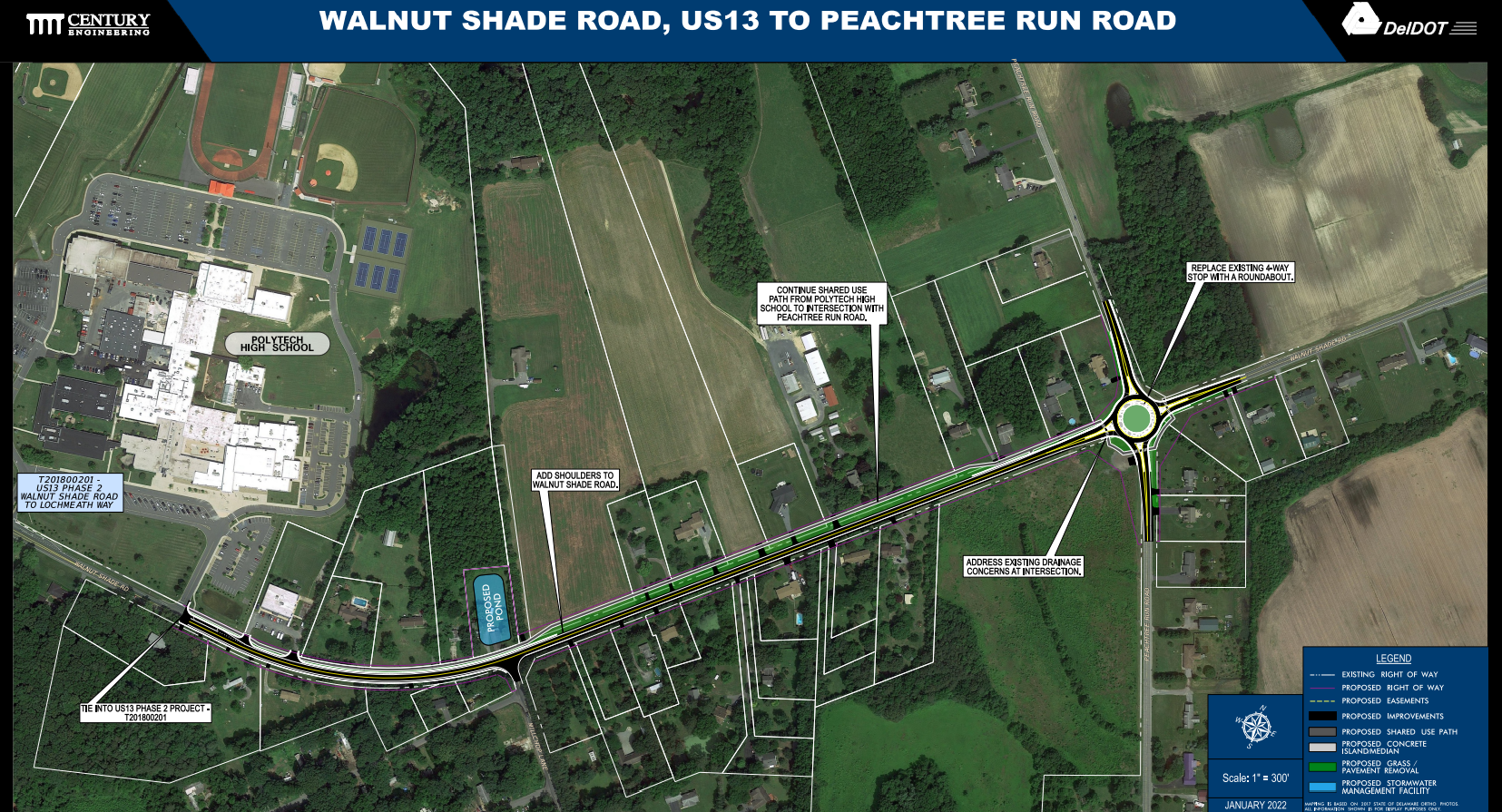 “What was once just a rural, two lane road, is seeing enough traffic and certainly a higher number of crashes that we need to do some expansion of that roadway,” McLeod explained. “There’s people walking out there along this road with no shoulders, no sidewalks, and that’s something that we definitely have to address.”

For some residents, the plans would take upwards of 60 feet from the front of their properties and, while they would be compensated, if they refuse to sell part of their land it could end up going to court.

80-year-old resident Janice Walls who lives just adjacent to Polytech High School, directly across the street from Faye Wing, said she was approached by project officials who want her to sell her home, but she doesn’t want to leave.

“This is my life,” Walls stressed. “I’ve been here for over 50 years and I’d like to stay here, to me it’s peaceful and quiet, and if the state were to find me a house or whatever, lord only knows where it’s at. I don’t want to leave, I really don’t.”

McLeod says the push to acquire her property comes amid grave safety concerns, and that officials would re-locate Ms. Walls and cover all of her costs, but if she refuses to sell, it could be left up to the courts to decide.

“Her home at the intersection of Millchop and Walnut Shade has seen numerous crashes over the years, including her home being struck,” McLeod said. “Ultimately, if that isn’t possible, we do pursue the condemnation process where the court determines compensation to complete the property acquisition.”

An earlier statement was issued by McLeod prior to our interview that stated Walls was previously receptive to the idea of selling her home and relocating.

“Ms. Walls was receptive to her property being purchased by the Department at a meeting that took place in November 2020, as well as receiving relocation assistance from the Department,” McLeod stated in an earlier email. “Since she was receptive to the idea, DelDOT moved forward with designing the new stormwater pond on that property. If the owner had been opposed, we would have scrapped the plan and pursued a different location for the pond. Our real estate team met with her this month, on August 15 to begin the process of acquiring the property.”

Moving forward, McLeod says project officials will be speaking to residents in the hopes of finding solutions that benefit everyone: “we understand that these are peoples homes, they take pride in them, and we’re also trying to obviously protect their property but also make these needed safety and drainage improvements that have been a long time coming.”

The project is expected to start sometime in 2023 with a completion date set for the following year. DelDOT officials have plans to meet with the residents on Walnut Shade individually as they wrap up the design phase of the project.