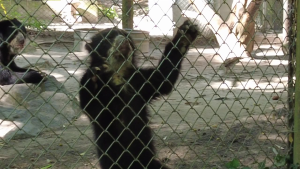 SALISBURY, Md. – The Salisbury Zoological park has been giving residents a free and exciting adventure with wild animals for over 60 years. Even though the zoo has gone through some major changes since its beginning, those with the park say they have a lot more plans in the work. “Trying to give them natural spaces that enhance their normal characteristics and abilities,” says zoo Director, Leonora Dillon.

Recently, the zoo said goodbye to a few beloved animals and hello to some new ones; two Andean bear cubs, a red wolf, a brother-duo of spider monkeys, and even a sloth. “Mornings tend to be a good time to see most of the animals or late afternoon, they’re just like humans, so if it’s hot and nasty in the middle of the day, they would prefer to be in a cool space,” says Dillon.

Those editions are also accompanied by numerous partnerships to help expand select exhibits and spaces. Dillon tells 47 ABC, “We will be doing a large push fundraising there and in doing so, the otters will be repositioned to another spot.” She adds, “Or grounds keeper and our curator have been working hard on creating spaces that allow the humans to get in.”

Through partnerships with places and organizations like Salisbury University, the city of Salisbury, and the Delmarva Zoological Society, those with the zoo say there are new and engaging tools for the animals to test their primitive ways. “The city is of course our cheerleader always in assisting us in an anyway they can,” says Dillon. She adds, “Anytime when we get the community involved, they feel like they’re a part of it, they claim ownership.”

The zoo also updated the Morgan Center, home of the reptiles, as well as the addition of a full-time veterinarian the zoo to better care for all the zoo animals, and an expansion of the space for alpacas, and their birds. “It’s wonderful to see the animals seeing their neighbors and having a great time, it’s great to see,” says Dillon.

Those with the zoo also tell us, that it may be a bit before than can get working on an expansion. However, they’ll keep trying and inviting more community members in the meantime.

The zoo is open every day from 9 a.m. to 4:30 p.m. and you can visit the Salisbury Zoo website for more information.