Phils fire Girardi, Thomson to take over as manager 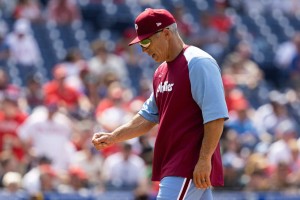 PHILADELPHIA (AP) – Joe Girardi has been fired by the Philadelphia Phillies after his team’s terrible start. He’s the first major league manager to lose his job this season.

Philadelphia said bench coach Rob Thomson will become interim manager for the rest of the season.

Expected to contend for an NL East title, the Phillies are 22-29 and 12 games behind the first-place New York Mets.

Girardi started as the Phillies’ manager in 2020 after previously managing the New York Yankees for 10 years. He finishes 132-141 with Philadelphia.