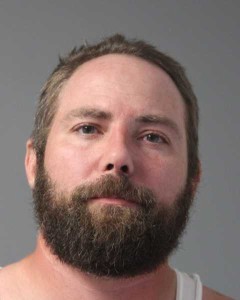 FELTON, Del. – A Felton man is facing serious charges after police say he was involved in a domestic dispute Friday night.

Around 8:22 p.m. on June 24th, Felton Police were dispatched to the 100 block of East Sewell Street. It was reported that a white male suspect was threatening to shoot a female victim with a gun. When police arrived, they found white male with a gun, and later identified him as 39-year-old Russell A. Rubley.

Investigators say Rubley had pointed the gun at a 37-year-old victim and threatened to shoot her in the face. The victim was able to flee the residence, and wait at Felton Police Department as officers responded. Rubley was arrested scene, and taken to the police department for processing.

Rubley is now charged with aggravated menacing, terroristic threatening, offensive touching, and possession of a firearm during the commission of a felony. He was arraigned by Justice of the Peace Court #2, and issued a no contact order with the victim. Rubley was taken to the Department of Corrections on $56,000 cash bond.