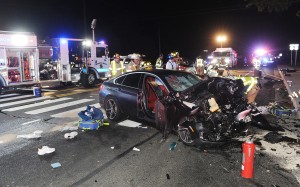 REHOBOTH BEACH, Del. – Multiple people are on the mend after a serious crash in Rehoboth Beach Friday night.

Around 10:45 p.m., The Rehoboth Beach Volunteer Fire Company responded to the crash involving two vehicles at the intersection of Route 24 and Warrington Road. The first arriving units found four patients in each vehicle. Fire officials say both of the vehicles were heavily damaged.

Sussex County EMS, Rehoboth Beach Fire EMS, Lewes Fire Department, Millsboro Fire Company, and Mid-Sussex Ambulance also responded to the scene. As they worked to treat patients, fire crews used the Jaws of Life to cut two of the patients out of the wreck.

Two patients was airlifted to Christiana Hospital, and six patients were taken to Beebe Medical Center and Bayhealth Hospital. The extent of their injuries is unknown at this time.

Crews were one scene for more than two hours. Delaware State Police are continuing the investigation.