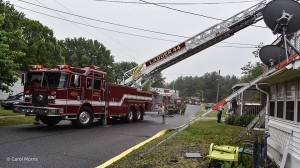 Investigators say The Citizens’ Hose Company responded to 911 reports of smoke coming from a house on Shortly Lane just before 3:30 p.m. When firefighters arrived, they found an active fire in the kitchen.

Deputy Fire Marshals were called to the scene to investigate. They say the fire started on the stovetop when food being prepared for cooking caught fire. The flames caused about $5,000 worth of damage to the kitchen. The victim was taken to Bayhealth Kent Campus in Dover. She is listed in serious condition due to smoke inhalation.

The American Red Cross is providing emergency assistance to the victim and her two dogs.